Keeping up with Illinois HB 1452 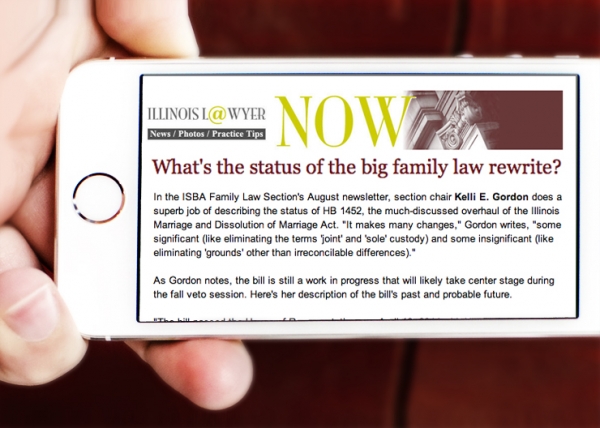 This month, in the ISBA Family Law Section newsletter, Kelli brings 33,000 members of the association up to date on HB 1452, the much-discussed overhaul of the Illinois Marriage and Dissolution of Marriage Act. Here’s what she wrote:

The bill is still in the process of being amended and the Illinois State Bar Association is playing a role in trying to make additional amendments.

I get asked on a weekly basis, “What is the status of that ‘Big Bill’?” So here it is:

The bill passed the House of Representatives on April 10, 2014 with House Amendment 2 and it was sent to the Senate the same day.

Senate Amendment 1 completely deleted and replaced the underlying bill on May 8, 2014.

The bill ended up in the Committee on Assignments at the end of the spring session.

During the fall veto session (November 19 to 21, 2014; December 2 to 4, 2014), the bill will most likely be referred to a substantive committee such as the Judiciary Committee.

It can, and probably will, be amended again by the Judiciary Committee.

If it passes the Judiciary Committee, it will have to be voted up or down by the Senate and sent back to the House for concurrence with any Senate amendments.

If and when the House concurs in any Senate amendments, it will be sent to the Governor.

Within 60 days of being sent the bill, the Governor can sign it as is, make specific changes to it in an amendatory veto that both chambers must accept, veto the whole thing, or do nothing.

If he does nothing, the bill becomes law as a “pocket signature.”

The full text of the bill can be found by going to the Illinois General Assembly Web page, www.ilga.gov and on the left-hand side of the homepage in the search engine insert HB1452. (Hint: download the PDF version; it’s easier to read.)

It is unknown what the bill’s effective date will be, but the best guess is that if it is passed in veto session it will be June 1, 2015.

The Family Law Section Council has been working hard this summer to review the bill. As you will recall from Pam Kuzniar’s previous columns, subcommittees have been set up to review specific parts of the bill. The subcommittees then made reports to the council regarding what they approved of, disapproved of, and potential changes to the bill.

Another subcommittee, the “Collating Committee” (William Scott, Matt Kirsh, David Levy, Richard Zuckerman and Jennifer Shaw, as well as Jim Covington) has spent countless hours in reviewing these reports and “word smithing” the bill to present it to the council at our next meeting. From there, the council will vote and a recommendation will be made to the Board of the ISBA.

One of the biggest changes is the repeal of the “removal” statute.

Instead, HB1452 uses the term “relocation,” which is defined as “a change of residence of more than 25 miles for more than 90 days that significantly impairs a parent’s ability to exercise the parental responsibilities that the parent has been exercising or is entitled to exercise under a parenting plan or allocation judgment.”

Some people have confused HB1452 with other bills that had been drafted last spring.

An earlier version of HB1452 did have an aspirational section that stated that the non-custodial parent should have at least 35% of time with the minor children; however, that section has been eliminated from HB1452.